IOM assisted the Government of Suriname in launching a website to gather information on the skills, experiences and interests of Surinamese diaspora members, and to engage it in contributing to the country’s development. These will be through investment, trade and repatriation of skills.

The launch took place in the Surinamese embassy in The Hague, Netherlands, where approximately 347,700 persons of Surinamese origin (1st or 2nd generation) formally live. That’s compared to an estimated current population of Suriname of 585,000.

The site (www.diaspora.sr) also provides useful information regarding visas and the regulation of Persons of Surinamese Origin (PSA), a status established in 2014 for diaspora members, including people with parents or grandparents born in Suriname.

Additionally, the site will serve as a one-stop shop for diaspora community to access information on investment opportunities and development initiatives in the South American country.

IOM Regional Coordination Officer for the Caribbean, Robert Natiello, stressed how insightful data would encourage the Diaspora Engagement Strategy. “The Government of Suriname recognizes the value its diaspora can bring to development efforts, and the website provides a viable way of attracting diaspora to support key sectors such as agriculture and technology,” he said. The website is part of the “Mapping Suriname’s Diaspora Project”, a Ministry of Foreign Affairs initiative supported by the IOM Development Fund.

In the framework of the Mapping Suriname’s Diaspora project, a workshop was organized a few days later by Results4business NV in coordination with IOM in The Hague. Entrepreneurs who are considering to invest in Suriname or who want to start or expand a business in Suriname, participated in this workshop.

Information was also provided about a selected number of entrepreneurs to participate in a ‘go-see programme’, which includes an orientation trip to Suriname. 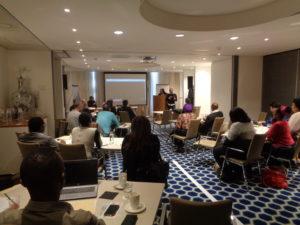 Previous Post: « Meeting with the Dutch Association for Ethiopian Tigray in the Netherlands
Next Post: Aiming for Sustainable Development in Sierra Leone »